I apologize but in the third segment I use a word I can only describe as inappropriate. Listener beware.

This is The No BS Coaching Advice Podcast, Episode 167. I'm your host Jeff Altman, The Big Game Hunterand welcome.

I like to spend some time once a week talking with you about a couple of things that surface for me that I think could be helpful for you. And well, this one really starts off with anger. I had the the idea of talking about something different first, but this is what came up for me as soon as I started doing the show, and how easy it is to split off and go to that angry place that I know I sometimes do and I know some of you do as well. And I'm reminded of this by someone I work with and myself for that matter.

My own story involved yesterday having to be at a different place for a group I normally run because of a series of miscommunications, where I tried to be clear about a change that we had to make. And then it got ignored. So a group met in one place and another group and I met at another place. And it's frustrating because no one sought clarity or responded soon enough to get certainty in the situation.

I value easy; that's one of my core values. I value easy. I don't want to have to do things three or four times to get the one thing right. I want it done right the first time and it gets me angry when I have to revisit the same decisions over and over again. I don't know what your story is, but I operate from that place.

SEGMENT 2. So many people are part of a herd. You know, they follow like lemmings doing whatever they're told, doing nothing to stand out from anyone else. And they become frustrated when they don't get the results that they want.

If you're someone who's managing you, if you were that person, how would you distinguish between you, the employee and the other employees? You're doing nothing to stand out. You see when you're part of the pack, when you're part of the herd. You got your nose in other people's rumps all the time and you smell a bunch of crap, right?

And the issue comes down to is, you ultimately don't want to be that person, do you? You want to be the person making decisions, and there's no proof that you can. You have to learn to make hard decisions. And one of the hardest decisions people have to make is standing out from the pack,, being different than everyone else and, often, better than everyone else, although different sometimes is good enough.

Be that person that everyone sees as the leader and the champion. And don't just be like everyone else.

SEGMENT 3. I was working with someone this morning who I I coach from time to time, and there were two things he said that were absolutely remarkable. And, you know, I'll simply say that working with him . . . he's been going through what I'll politely call a funk. And when I spoke with him about it, I did what I always do-- No BS and he started to pull out of it.

And he said to me, Ah! Tough love, or tough shit. Excuse my language there. And then he continued on using another phrase, "the hard truth or the soft lie."

And I know this morning when I was working with someone else, that theme showed up with them to where they were talking about really wanting this one award and on day one, how angry and frustrated he was when he didn't receive it. And I know he messaged me about his dismay about it. You know, after missing it on day one, only to receive a different and as valued award from his firm on day two.

Folks, so often we need to deliver and receive tough love. Because when we're nice to one another, well, we're cutting one another slack. Often, all we're doing is helping them believe their own BS.

So that's today's show. I hope you enjoyed it. And if you did, subscribe, an apple podcast, Spotify, wherever you listen to the show, just subscribe so you can get downloads whenever I release a new episode. Each show contains bite size morsels of advice, just like today's

I hope you enjoyed it and I do hope you subscribe. And if you're interested in one on one coaching, visit no BS coaching advice comm you can schedule time for free discovery call or go right into coaching. I'd love to help you. And if you're interested but not quite sure where to start, take the online assessment available at the big game hunter.us forward slash success. It will give you a few ideas and it can be a launch point for her work together. In the meantime, I hope you have a great day and take care

Take this free test to see some of the places you might need some help https://thebiggamehunter.us/success 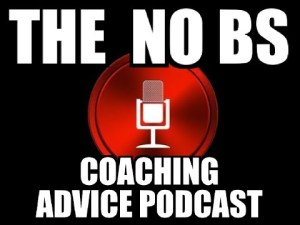 and to get some direction and some ideas of what you might want to work on.

Are you interested in my coaching you? Visit NoBSCoachingAdvice.com and schedule time with me.