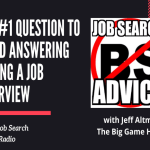 EP 1962 So many people give away the farm one answering interview questions. Here I tell you one question that you should always avoid answering, particularly with HR.

I'm Jeff Altman, The Big Game Hunter. I coach people. I do career and leadership coaching. In the career element, it's all aspects of career coaching, which can involve job search, negotiation, career transition, a whole host of different elements.
Here, I want to speak to what you really shouldn't answer during an interview. I want to preface this with a classic line from a movie called, "Fight Club." The first rule of Fight Club is you never talk about Fight Club. The first rule of interviewing isn't that you don't talk about what you currently earn if you're asked about that, unless you're in a state, or a locale, where that's an illegal interview question. You never address it there.
But the question you never want to really answer is what are you looking for? The reason you don't want to do that is that, most of the time, they're going to start negotiating before you have information.
"Was that really how low you'd go?"
"What would you say the rock bottom base salary is, exclusive have any bonus that you'd find acceptable to join the staff of a firm?"
You see, they're negotiating before you have information. And, you know, you may think it's part of the interview process but really, it's part of the negotiation process. They're negotiating early, to try and drive the number down as early as possible.
You don't really have information to make an assessment. After all, if this is a ridiculously hard job, why would you accept less than what is real value is?
Instead, I want you to think differently. I want you to think in terms of ducking the question and simply say, "Hey look, you know, it's way too early for me to be talking about this. I haven't met with the hiring manager yet. I really know very little about the job, the team, what the challenges are . . . " something along those lines. "And, the fact of the matter is, there's a pretty good market out there for what I do. So, I would just simply say, if you decide I'm the right person for you, and, you know, I see that this is as a great opportunity for me, I just want to encourage you to make your strongest offer, because firms are going to want to hire me, because there are labor shortages out there."
I was talking to someone I coach last week, who's been at one organization for 30 years. 30 years! She goes out on her first two interviews and gets two offers. She's a small company person getting over some big firms. This is a shock to her.
Not in this economy.
So, even if it's a tough economy, you want to simply say, "hey, look, I really know nothing about the job. Yeah, I've seen a job description (or if you haven't even seen the jobs disruption) or "Yeah, I have no sense of what the work is, what the reality is of what I'm stepping into. It's way too early for me to agree to a number. Again, I just want to simply say, if you decide 'mI the right person for you, and I decide it seems like a good opportunity for me, I just want to encourage you to make your strongest offer. so that, in this way, you know, other firms are going to bid for me and, you know, the reality is, money is going to be available for me."
So, in this way they can't start playing the game with you about the opportunity or something. Of course, the opportunity is worth something; I can take a good job for great money, but you aren't certainly going to take a good job for mediocre money.
So, again, duck the question about what you're looking for. Follow the advice I've given you. at day. Take care