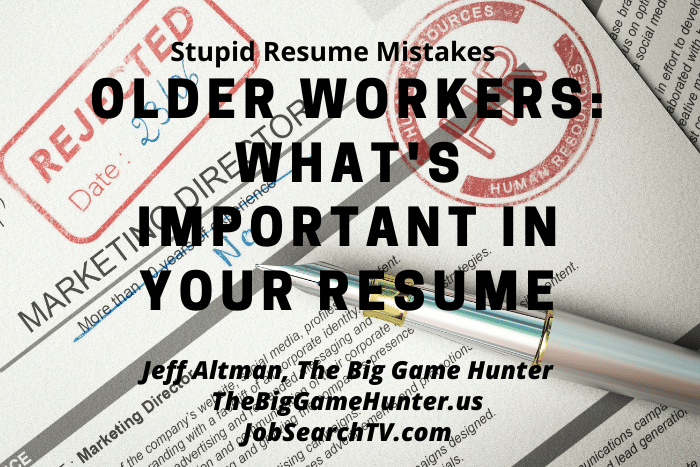 Facebook Share Twitter Share Google+ Share
I frequently speak to groups around the country and one of the concerns people have is that ageism is going to get them rejected. Then I read resumes they keep someone from even being interviewed. What’s wrong? What should you do instead?

Stupid resume mistakes that you as an older worker make! I'm going to cover one today, that happens all the time. And let me just start by saying, every time I speak to a group, the group tends to be older, and they tend to be concerned about ageism. And then I receive a resume from people who are concerned about ageism and it starts off with a summary area that says "More than four decades of experience with . . . " or "30 years of experience focused on . . . " and you're leading with your chronology.

Here's the fact of the matter. No one cares what you did when Bill Clinton was president, or that you entered the field at that time. What people care about is MAYBE the last 10 to 15 years of background and within that, they want to know what you did that relates to what they need. Rather than providing them with the memoir of your life in the form of a resume, focus in on the last 10-15 years. Maybe have a sentence at the end that says "Prior experience was with . . . " and list a number of firms, "where I rose through the ranks until I became a manager at so and so which is, let's say, the first firm that's appearing on your resume.

Fundamentally, when you were hiring, what you cared about was what the person sitting opposite you could do that related to what you needed, right? They're no different. But you folks insist much too often, that they have to read through your life story. The history of your career as though it really matters. At most, it's 10 to 15 years that matters, which takes us back, as of the recording right now, to 2006. George W. Bush was president. It's a long time ago, right. So really, what you did back in The Stone, Ages doesn't matter. Focus on recent work.

I'm Jeff Altman. Sorry, it's a blunt message, but some of you need to hear it. If you're watching on YouTube, click the like button, share it, do something that lets people know this was helpful to you. In addition, I'll simply say, connect with me on Linkedin at Linkedin.com/in/THeBigGameHunter. My network tends to be a lot bigger than yours. And thus, what you'll be able to do is grow exponentially.

In addition, in addition, if you're interested in one on one coaching, at my website, which is TheBigGameHunter.us, you can schedule time for a free discovery call or schedule time for coaching. I would love to help you. I'll also mention at the website, the blog has thiusands of posts that will help you. Have a terrific day and most importantly, be great