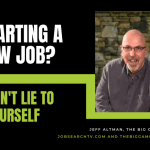 EP 1939 People often lie to themselves about their new jobs. Here, I try to head off 3 lies people tell themselves.

I thought I would do a video for those situations where you're starting a new job as a way of heading off disappointment that sometimes occurs in the new role. The issue for the disappointment, more often than not, is you.

You do things that give yourself problems later on. Let me just be clear. I remember when I was married to my first wife, and, yes, I'm married, again. I interview much better now (LOL). Every time my first wife would start a new job, the people she worked for for were fabulous. They were terrific. I love these people. And then two weeks later, she'd come home and tell me that she wanted to quit.

What was going on with her? In retrospect, I can kind of break it down into a couple of different places. Number one is her belief that there'll be no stress, no headaches, no problems in the new role. That everything will be sunshine, flowers, chocolates, and by that I'm stereotyping. There'd be no issues whatsoever with her co-workers, that the work was going to be delicious and everything was going to be hunky dory. Obviously, it isn't and that's self-delusion, that kidding yourself, became a problem for her because these folks that she'd work for became demanding because she was an assistant to.

I remember there was one job she had which was working with the founders of a cable network. She was going to be their executive assistant. Had she stayed there, she would be a very wealthy woman today. But she didn't.

I'll simply say that these guys presented themselves in a nice, normal way. And she didn't have the wherewithal to listen to me when I said, "hey, look, these guys are going to have a lot of pressure on them, and they're going to make demands of you. You will get stressed. Invariably, that is what happened.

Another problem that would show up is that all the problems of the last position will be gone. I'll be finally happy.

Like I did a vidand in a podcast not long ago, where I called attention to how often people start new jobs and there's some crisis going on in the organization or there's been reorg that's taken place from the time that they got the offer until now. They walk into mew situations where suddenly it's not the job that they thought it was.

Well, sometimes even when it is the job that they thought it was, they didn't quite hear it. They didn't quite hear all the details because they were enamored with the person interviewing them. It becomes a lie that you tell yourself that now you're going to be happy. That raise that you got satisfies all your problems.

By the way, the raise doesn't satisfy the problems, you'll outspend your income and just giving you a few dollars more, well frankly, you're going to outspend that too. So don't think that the next job is suddenly going to make you happy.
And the last thing I alluded to before is they told you everything about the job. Now, they may have given you the basics, but I'm going to tell you there are things that they don't tell you about in the interview. And your co-workers don't tell you about either.
A classic example is a guy that I coached who was taking a position with a small firm, and he was going to do customer service work for. And they didn't tell him about this part of the job where when the reception went out for lunch, they had this thing called ding duty. Ding duty was that time where the receptionist was out and the different groups would alternate on a weekly basis as to who would cover the reception. When the bell was struck and someone was in the reception area. Hence, the term ding duty. Pressing the bell. Someone has to come out.
There are always be little surprises like that that will show up in the new job. And initially, it's, "Oh my god. Oh my god." Just consider that you're going to be surprised and that not everything is going to be perfect. That they will withhold certain information from you, just like you withheld certain information from them. It's just human nature.
So I'll just say, don't lie to yourself. The next job isn't going to be perfect. You're not going to be happy forever. They're going to be days where you're just going to want to annihilate people. By the way, don't do that, please. You're just going to hate everyone, you're going to want to quit. You're going to feel incredibly frustrated to come home at night, stressed to the gills thinking that they lied to you.
The worst place that this happens is for the person who's been at one job for a long period of time. They quit thinking that the next place is going to be perfect. It isn't. And the statistics show people who have been in one organization for a long time, the first job they go to is a short tour of duty, they learn their mistakes, they go on to the next one pretty quickly.
So, again, don't lie to yourself. Know that the next firm is going to have problems, too. Your co-workers are not always going to be nice. The work is not always going to be perfect. You are going to feel stressed and that you're not always going to be happy.
The reality is, that's the way of life.