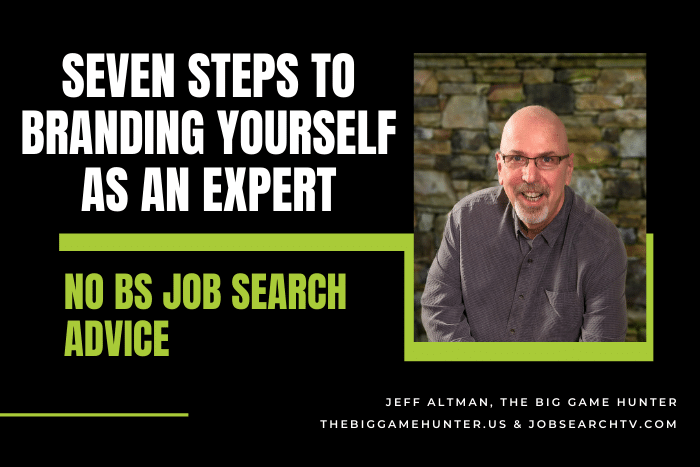 When you purchase laundry detergent, have you ever stood in the aisle of the store, looked at the list of ingredients, and said to yourself, “Hmm. The interrelationship between the chemicals in this one will make my wash much cleaner than the ones in this one”?

Of course not. You buy detergent because it’s cheaper, you have a coupon, you’ve seen a commercial or your parents use a particular type of detergent, rather than basing your decision on the efficacy of a particular brand.

Thus, you have made the case for why branding is such an important criterion when people make decisions and why you need to invest in building your career brand now, before you consider your next career change. After all, the person who gets ahead isn’t always the smartest or hardest working — although those are great qualities to have.

Now, I certainly don’t expect you to purchase ads to create the impression of yourself as an expert, but I do believe that you can make an investment in your career by creating real estate in people’s minds and being seen as a subject matter expert. Follow these seven steps:

1. Start a blog. Recruiters love to find thought leaders for their clients.

2. Create a video of yourself sharing your expertise with a trade or business group. Placing yourself in a situation where you’re in front of a group, well-dressed and in a position of authority shows that you’re an expert.

4. Write an article for LinkedIn once a month. Then, share it with your contacts and the public after you’ve published it.

5. Share your videos and articles on Twitter, Facebook and LinkedIn. The more people who learn about your expertise, the more likely one of them is going to recognize you for an opportunity.

6. Be a podcast guest. Many podcast hosts search for expert guests for their shows. Contact them. Often, an email address is available, or they may reference their LinkedIn profile on their show. Ask the host what they will want to interview you about. Most will do a brief pre-interview to get a sense of you as a potential guest. When your appearance goes live, share a link on your blog as well as on LinkedIn, Facebook and Twitter.

7. Speak about your expertise. Taking the steps above will help you get on the radar to speak at national conferences and events. You may not be on the main stage the first time, but you can evolve and get there with time and effort.

Years ago, a friend of mine spoke with me about doing career planning for the next 10 to 15 years of his career. As a low-level officer at a regional bank, he knew he had to step up in terms of his role and organization.

I told him, “We want search firms reaching out to you, not the other way around. We have to position you as a thought leader and get you on the speaking circuit.”

His first move came less than a year later when he was approached about a VP role at a large U.S. bank. Part of his negotiation was receiving permission to continue to speak on his area of expertise. “My success will rub off on you,” he told the bank. He survived several bank acquisitions and was eventually hired as a partner at one of the major consulting firms. His salary, excluding bonuses, increased sevenfold during this time.

Most of us have heard the fable of the three little pigs, each of whom builds a home with different materials. While the big bad wolf is able to blow down the houses made of straw and sticks, he is unable to demolish the pig’s homemade of brick.

Many people build careers made of inferior materials, and then they compound that mistake by outsourcing responsibility for their careers to employers whose focus (rightly so) is on the success of the business rather than that of their employees.

Knowing that you are responsible, do you think you should take the lazy way of abdicating responsibility for your career and giving it to your employer, or look out for yourself and build a solid career of brick?

Search Advice Radio,” the #1 podcast in iTunes for job search with more than 2000 episodes. He also hosts Job Search TV on YouTube, Amazon and Roku, as well as on BingeNetworks.tv for Apple TV and 90+ smart sets.