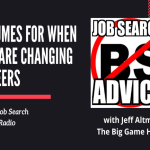 EP 1968 Resumes for career changers can be a tricky business. Should you submit the usual resume or adapt it? Here I answer it explicitly.

This is designed to talk with those of you who are thinking about changing careers. How do you write a resume for that? If you share a standard resume for what you do, you're making a mistake.
I remember when I was still doing search and a person I was working for the large New York bank, who wanted to work for a nonprofit, sent me the resume about their background in foreign exchange systems and other things that related to banking that were completely irrelevant, that would cause someone's eyes to completely glaze over.
Why they thought this was useful escaped me but I had a conversation with them and although they described it as "dumbing it down," I described it as speaking to the audience.
That's really what you have to do. Even if you're not changing careers, but particularly if you are, you need to have a resume that speaks to the receiving audience and what do they care about? The first thing is that they understand what you did and that involves identifying transferable skills that you have from your existing career and portinbg them over to the resume so it's obvious.
Now I can talk with you about formatting. So, I know some people talk about including an objective. I hate objectives because no one ever changes them. They lock you into a presentation for a certain type of job and you're not going to remember to change it before you send it out for something that doesn't quite correlate with the objective.
I'd rather have you send individual emails to which will attach your resume that's
speaks to how your background fits the role and addresses what would be the equivalent of the objective. But, like a functional resume, I want you to have a list of transferable skills at the beginning of the summary and relevant experience at the beginning of the resume, because those are keywords that are going to be searchable in their system. That will help you.
Then from there, I don't want to call it dumbing down. I want you to speak about what you've done that relates to the role that you're submitting your resume for, or that you've networked into. Thus want what you're doing is speaking to the audience in their language.
After all, if you speak French, and the audience only knows English, how understandable are you? Not at all. And it's the same thing with your resume. You need to construct a resume in their language and, yes, I know you can say, "They might have worked at a bank before doing foreign exchange trading systems, but they probably haven't The statistical probability is pretty small. So, speaking their language, have a resume that focuses in on transferable skills and experiences that you perform that relate to what the organizations looking for.
Thus from there, if you're submitting your resume, if you're networking and giving your resume to someone to present to a hiring manager, you stand a shot.
One more thing, if you're still posting resumes on job boards, I want you to think of the same thing but an expanded resume. Again, everything relevant that you've done, all the experiences that you've had in the summary, to draw honey to you. Also, you may change your LinkedIn profile to not overshare. And that's the way I'm going to describe it . . . not over share about your experience and systems because, for some firms, and again, I'm going to use the example of large bank, nonprofit, they may be intimidated by the fact that you've done this substantial system for a large bank and think that you're not interested in something like what they did. Get rid of it. It doesn't matter if that's what we're really going for.In and in and in and in and would be really is so is Mike tonightthe
In this example, you're looking at nonprofits, you're looking at other banks, you have to leave it in, but otherwise get rid of the extraneous. It only gets in the way.