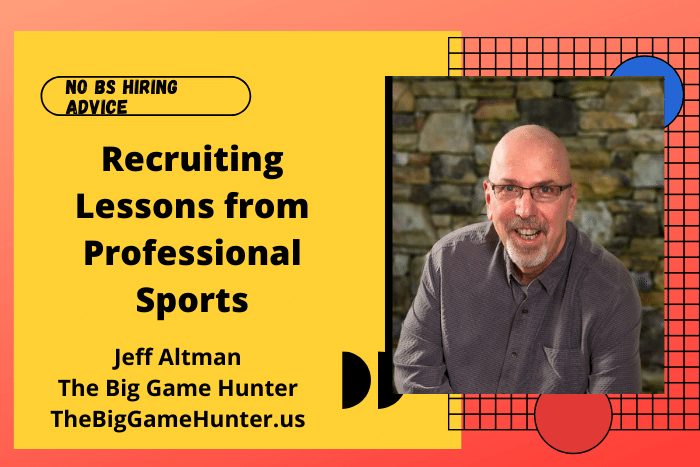 9 Lessons from The Pros

I grew up in New York City, the home of the Yankees, Giants, Knicks, and a host of other teams. As a boy growing up, the newspapers in town would feed us “news” (I put news in quotes because where free agency is concerned, I’m sure a lot was wishful thinking on the part of the sportswriter designed to help sell newspapers) about possible free-agent signings, trades and other machinations that would make our team champions. Many of these deals and free agent signings never worked out but there are wonderful lessons about hiring that are useful to use when you go into the labor markets to hire.

1. Make Hires That Can Perform in Your System. A few years ago, the star defensive lineman in football was a man named Albert Haynesworth. He played in Tennessee in a particular defense that maximized his strengths and then signed an enormous contract to play for the Washington Redskins in a system that did not support his abilities. Washington got headaches for several years and he was eventually traded to another team after failing to perform up to his contract. Haynesworth wanted to make a lot of money and did. Washington received a lot less than they wanted from him. Instead of hiring knowledgeable and capable people, make sure to explore how things were done at their previous employers and explain how they are done at your firm. Let them be “scared off,” rather than endure adjustment problems later on.

2. Make sure you have existing strong leadership in place. A former coach, Bill Parcells, used to have a number of players on his team who had played for him before and would occupy leadership roles that required that they mentor players who had not played for the coach before. He believed that without strong player leadership that supported him, players would find it harder to follow his system and not perform at a high level. Do you have leaders on your team that represent the right way for your new hires to perform? Do you have them meet with potential hires before they join?

3. Hire people who have been successful before. One of the best predictors of future success is a previous success. There are exceptions, of course, based upon life circumstances (I always think of the person who chose not to get a college degree because a parent died and they needed to support their family), but for most organizations, this should be part of any exploration of a person’s background. “Good enough seldom is” and the person who found it OK to graduate college with a 2.5 GPA will rarely be an exceptional performer for you. Sports teams prefer to hire from successful programs because the players understand the sacrifices that go into winning.

4. Use your team to go out and recruit for you. Successful people know other successful people and, if they don’t, you need to expand their understanding of their scope of responsibilities. When the Yankees target a free agent to sign, often their star players will reach out to the targeted player to help sell the team to the potential new player. This is not an employee referral program, but active recruiting and encouragement to join. Use people in your organization who have worked for the same firm as recruiting aids.

5. Know who you are and hire people who fit with who you are. This is different than my first point which was about systems; this is about character. The Yankees are “a character team” fitting for their former manager, Joe Torre, their long-term star, Derek Jeter, and a host of others who are low-key. In contrast, The Jets (one of two football teams in New York) prefers to hire loud brash outgoing talent in their coach’s personality. You need to know who you are and hire people who will be comfortable “in your locker room” as well as in your system.

6. Act decisively. Sports teams have the advantage of being able to watch films of the players when making their evaluations or have the experience of having competed against them. So often, firms are afraid of making a hiring mistake that their hiring process goes on seemingly forever. If after interviewing someone for hours you are left unsure, either reject them or determine quickly what leaves you unsure, resolve it quickly and either hire them or reject them. Then, re-evaluate your assessment process to see if there is a deficiency in it and correct it if there is one.

7. Read the Tea Leaves and Have a Plan B. A few years ago, star pitcher, Cliff Lee, was the prize of free agency. Teams went to Arkansas to meet with him and his family. The Yankees arrived with a big presentation, a boatload of money, contact with their stars, and more. The Texas Rangers who Lee was with did the same. After more than 6 weeks, Lee chose a third team, The Philadelphia Phillies with whom he played before and who offered less money to join. In the meantime, other players the Yankees might have been interested in while Lee was deciding were signed by other teams leaving the Yankees with poor choices. When you see someone taking a long time to decide there is a message being communicated that they are not sold on joining you. Have a contingency plan in place so that you do not get left with a big hole on your team.

9. Know the new hire’s motivations. Many want to be champions. Some want to be celebrities or ambassadors. When I think of David Beckham a footballer (soccer player for my American readers” and his signing a contract with the LA Galaxy, Beckham was the best player in his sport, married to a Spice Girl, the subject of the movie, “Bend it Like Beckham,” and financially well off. Yes, part of his reason to join was financial but part of it was to help make football (soccer) successful in the United States. Understand the motivations of the potential hire before you make the job offer.

Hiring doesn’t have to be difficult or time-consuming. Follow these lessons from professional sports free agency and you will see an improvement in the quality of your new hires.

Jeff Altman, The Big Game Hunter is a career and leadership coach who worked as a recruiter for more than 40 years. He is the host of “No BS Job Search Advice Radio,” the #1 podcast in iTunes for job search with more than 2100 episodes. He also hosts Job Search TV on YouTube, Amazon and Roku, as well as on BingeNetworks.tv for Apple TV, and 90+ smart sets.