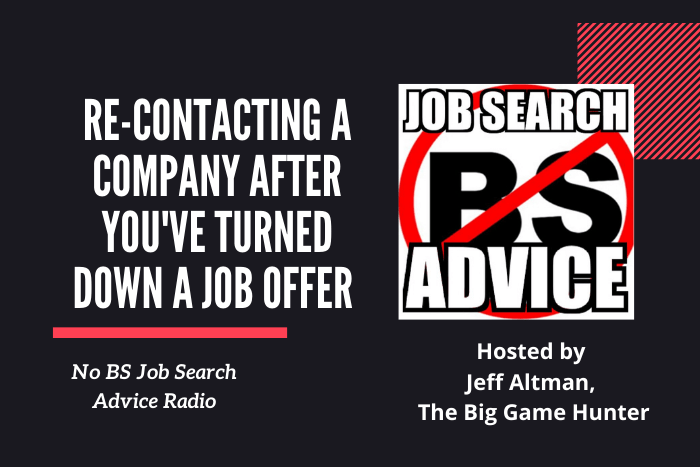 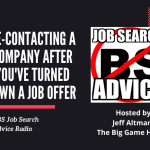 EP 2042 Jeff Altman, The Big Game Hunter answers a viewer’s question about re-contacting a company that they turned down a job offer from.

Today’s show is brought to you by Skillshare, a  service where you can learn a lot about a lot of different things both professional and personal. For one low price, you can receive unlimited access to any of the classes on the site including mine. You’ll receive a free trial at sign up. Here's the question: Can I asked to be a job candidate again for a company to whom I told I was taking another offer? The language is a little quirky. I'm going to translate it.

Apparently this person received an offer or backed out of an interview cycle with a firm, saying that he is gotten another offer. Apparently, they decide to turn down that offer , and now is wondering whether or not he or she can go back and talk to that firm about a job.

The answer is, "Sure." There is no taboo about this except the awkwardness that you may feel about going back and saying this.

Part of your responsibility here is to tie it into their circumstances. "I was really excited about this job. I received an offer and was ready to say yes and then something came to my attention about the firm (or about the hiring manager) that gave me cause for pause. " For example, the offer wasn't what I was led to believe it would be is a reason that would be valid.

"I was led to believe will be for such and such amount. It was for significantly less." You get you get the idea.

"So what is it that you're looking from us in the way of compensation?"

" For this job. I was looking for such and such. They offered me $30,000 less and I thought it was appropriate to turn that down." You get the idea.

They're going to want to explore the circumstances that caused that offer to go away or be turned down and then you're going to be looking to switch the conversation at a particular point in talking about their job, get into an evaluation process with them.

They may continue with you by saying, "Where are you in your job search now?" That's because they may be starting at the beginning with you (again). If you have 3 things are close to an offer, why would they start now?

Here's another variation on answering that question.

I don't know if this happened 4 years ago or 4 weeks ago. If it is 4 years ago, they may have some notes, especially for speaking to the same person as you did, then about the turndown that you gave them, and then go into the explanation for why you chose that firm over there firm. If it is 4 months ago, the 1st answer that I gave applies.