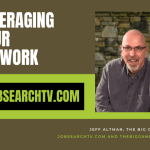 EP 1948 I was interviewed by Tony Talbot of Career Move Secrets Podcast on a wide range of subjects including, most important of all, leveraging your network.