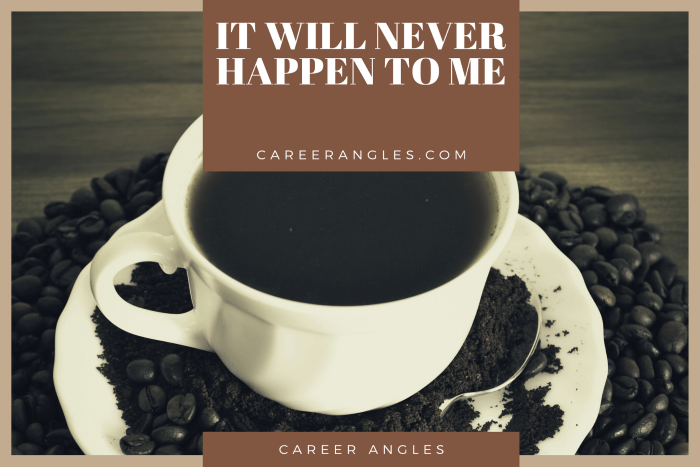 I’m connected with him on Facebook and read that he was experiencing heart failure, would need to have heart valve replacement surgery in the next few months. When I knew him he was obese and, although, he says he has lost weight, apparently it hasn’t done enough to rectify whatever his genetics are and his previous diet had been to avoid being in this predicament. He never thought would happen to him.

There are many things in life and our careers that we never think will happen to us.

We work hard. We try hard. We do what we are told and, at times, make great suggestions about how to do things better with no expectation of reward other than we get promoted or get a good salary increase.

We never think will be passed over. We never think that bad economic times will cause us to lose our jobs. We never think our boss will leave and take with them all the promises and hope that they gave us, leaving us with a new manager who knows nothing about us and with whom we have to start from scratch again.

And, of course, no one could predict a pandemic would decimate the world economy but two years before I was starting to warn people that we were due for another recession that people should start getting ready. I receive messages from several people telling me that they wished they had heeded my warning and did things to put networks in place and their financials in order in preparation or bad times.

Two of them told me that they wish they had done training for a certification during the past two years because they discovered how much in demand that certification was.

But they never thought would happen to them.

Whether you’re for or against a particular politician or a particular party or particular ideology doesn’t matter. They are all reactive when you need to be proactive. They care about your votes and not you.

They are not responsible for your career. You are.

As of said thousands of times, you are the chairman of the board of your own company. Your wife/husband/partner and children if you have any all sit on the board. You are responsible to the board for sales (salary and compensation in general). You have to make decisions for them and not your employer.

I know I will get pushback but employers lie just like employees lie. Everyone is posturing for the best outcome for themselves. Everyone is manipulating the situation for their advantage.

No one ever thinks will happen to them.

It could have been avoided or at least mitigated.