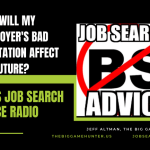 EP 1565 The question from someone that is very applicable in today’s times it is hard to answer.

How Will My Employer’s Bad Reputation Affect My Future Opportunities? | No BS Job Search Advice Radio

I'm Jeff Altman, The Big Game Hunter. I received a great question from someone. "How will my employers bad reputation affect my future opportunities?"

It's a tricky question because their bad reputations that exist in the job market, with the public at large, in a variety of different ways word is hard to measure and answer, but I will give you a few examples.

When Bernie Madoff became a celebrity crock, a celebrity thief, they were people who work for the Madoff companies who were tarnished with that broad brush stroke. They found it very difficult to find new positions for quite a long time.They were unemployable. It was as though they had committed the crimes that he had. In this example, we are talking about criminal behavior. We're not talking about a tough work environment that causes a bad reputation.

On Wall Street, for example, there are a lot of tough work environments yet, it is considered part of the norm. Some firms carry bad reputations; some carry great reputations. What is the basis of people's opinions? Those opinions often change.. After all, there were times when working on Wall Street was considered fantastic!There are other times where is been considered, not Madoff-ized, But where people were thought of as little more than criminals who stole money from people. There are other times word is been worshiped as being a great solution.

Right now, Silicon Valley is being worshiped. Will that change? Who knows! Reputation is malleable. Has it gotten to the point of being criminal behavior? I doubt it. What I would say is don't pay attention to these things. If you are happy in your job, if they are not engaged in criminal behavior or criminal racketeering where everyone is going to be put in jail, don't worry about it! If you have a great job, stay. If you don't like the work, get out. It's really that simple.

To worry about reputation… You can always be the"A" performer In the mediocre environment. You can be the best person working there and known as the best person working there by putting yourself in the position is being known by others. Don't just keep working with your head down doing your job like so many people that I coach. Don't put yourself in that position where one day, you have to network your way into a new job and nobody knows about you. It's not the smart way to do it.

I'll simply say that this is a question that is relevant to most of you. You are not in a situation where you are dealing with a criminal. You're not the situation where you're dealing with anything more than Cutting jealousies within and between firms where they try to knock others down to build themselves up. Don't worry about it. Things change.

I hope you found this helpful.I'm Jeff Altman, The Big Game Hunter. If you're interested my coaching you, Visit www.thebiggamehunter.us. There are tabs on to that will tell you how to hire me. In addition, there is tons of great content, thousands of blog posts That I have done over the years that you can watch, listen to or read That will help you find work.

If you wanted curated, You can find that at JobSearchCoachingHQ.com.

I hope you have a great day. Take care!