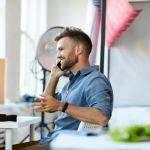 EP 1687 How Do I Respond To Recruiters? I Am Not Interested and Want to Build a Relationship. This is a really good question from someone. I hope you find it helpful.

I'm Jeff Altman, The Big Game Hunter. I'm the head coach for JobSearchCoachingHQ.com. Yay! And I received the question from someone, I thought it was terrific. It reads. Excuse me, I am going to read it. "If you're not looking for a job at this time, how should you respond to recruiters to build a relationship in the future that may be helpful.

So, here's the short version. Number one is of course, you're not rude or abusive. Even if they are, you say no. Start off with the premise of listening to what they have to say. You may not be looking, but the person who gets ahead isn't always the smartest or work the hardest although those are great qualities to have. People get alert . . . get ahead by being alert to opportunities. Sometimes, they are internal to the organization. Most of the time they're external.

They are external because firms and their managers take people for granted. They start to mentally silo people into specific roles. So, what you do is when they say, "is this a good time to speak," you say, "Yes, I'm not looking right now. But I'd like to hear what you have to say."

Now, they're going to mentally start wagging their tail in excitement, thinking as though they can talk you into the job. Now, I'm not suggesting that you allow them to talk you into the job. What I'm encouraging you to do is just listen to the idea of that they have. Listen to the role if it makes sense. If it doesn't make sense, you respond by saying, "this isn't right for me right now," and you may give them one or two explanations for it and then conclude by saying, "what I'd like to do is stay in contact with you. Maybe the best way to do that is through LinkedIn. Can I get the URL to your LinkedIn profile. I'll send a connection request to you. Let's stay in touch."

The idea behind this is "I know you're not gonna put a lot of effort into this, but they may. And they may actually have something better the next time. Don't expect calls every week. Seriously. But if something in your circumstances changes, you drop them a note from LinkedIn, you say, "hey, just want to bring up to date. Got a promotion. changed jobs. Whatever it is, you give them something relevant to what you think they would care about. They don't want to, unless you've developed a good relationship, they don't want it. They don't want to hear about the baby that you just had. They don't want to hear about nonsense. Recruiters tend to be transactional. They want to develop a relationship on, the one hand, and,, on the other hand, what they care about is getting paid. Now I'm speaking about contingency recruiters.

I'm not talking about executive executive recruiters who work on a retained basis. They tend to be a little less transactional. But ultimately, they don't have time to waste. No recruiter does because, ultimately ,they're compensated for their success. So don't expect that they're going to luxuriate in listening to your conversation about, I don't know, the Yankees, the Eagles, what whomever you have some sports team that you're fascinated by, they don't care. Instead, just bring them updates on what you're doing. Like if you got a promotion, if your role changes.

Yes, you updated your LinkedIn profile, of course, but you drop them a quick note and let them know kind of like you're talking to an aunt. So, kind of like talking to the uncle that you talk to, you know, every year or two. Got it?

So that's my my advice for that. I hope you find it helpful. If you're interested in my coaching you, reach out to me through my website, which is TheBigGameHunter.us there are tabs on the top. You can schedule time with me. Be happy to help you.

Also if you have a question for me, short, like this was, a short one, I don't want to hear or read a whole big story. If you want to start off with a story, I'm going to charge you for that. Again, that's my website. So again, if you have a quick question, connect with me on LinkedIn at LinkedIn.com/in/TheBigGameHunter. Mention that she saw this video. I love knowing that my videos have connected with people. And once we're connected, send the question over. I hope you have a great day. Take care!