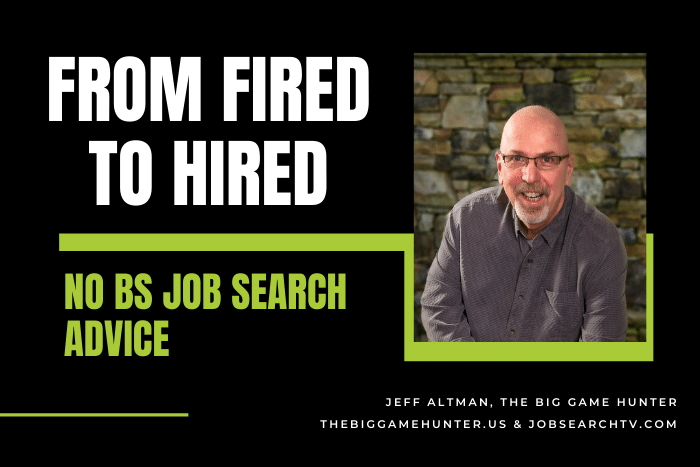 What happens in-between getting fired and hired? Here’s what we found after surveying 1,000 people who were let go to see the steps they took to bounce back.

Being called to the boss’s office and having to pack up your desk may leave you feeling depressed and unable to recover. But unemployment rates in the United States have hit the lowest point in nearly 50 years, and some of the top industries are hiring more than ever.

Getting fired doesn’t necessarily mean the end of your career, but how well do people bounce back from being laid off? Do people in certain industries fare better than others, and does one door closing lead to a better salary as the next one opens? To find out what happens between getting fired and hired, we surveyed over 1,000 people who had been let go about the steps they took and the emotions they felt. Keep reading to see what we found.

There are plenty of drawbacks that come with getting fired – one of which is the dread of telling a potential new employer that you were terminated. While no candidate is required to disclose that information, 54.1% of people were upfront about being fired during the interview process. People may also be more likely to reveal their past if it was due to unforeseen circumstances rather than a reflection of their work ethic – while just 11% of people were fired for poor performance, 21% were fired because of budgetary cuts. 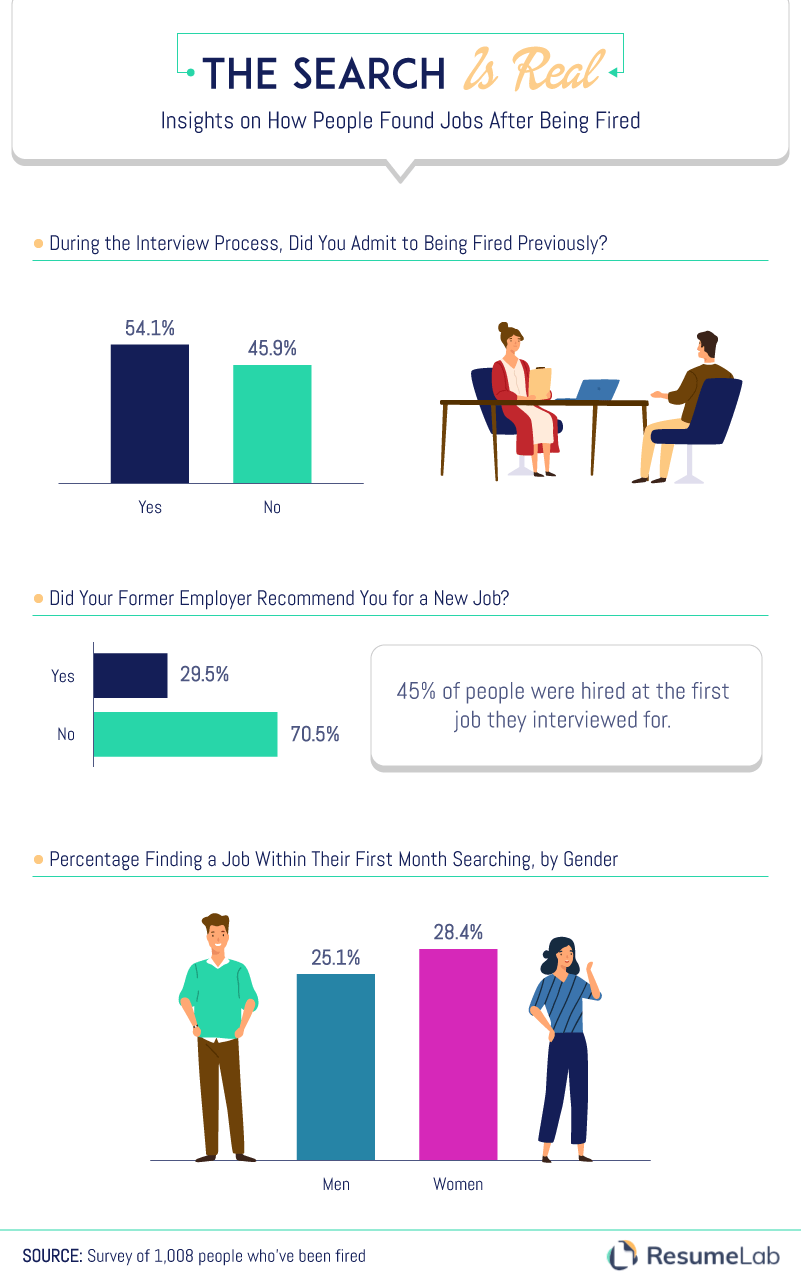 Dissatisfied After Drop in Salary 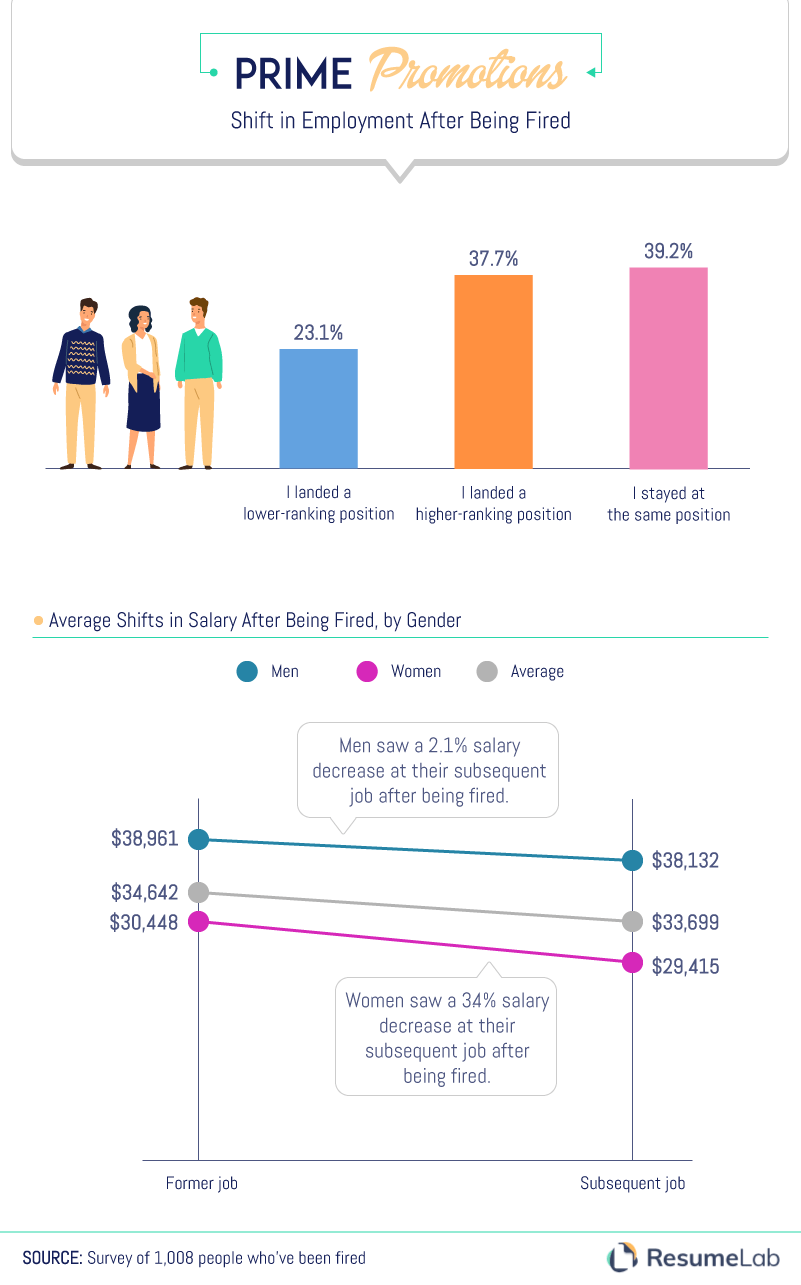 Considering the average person took a hit to their paycheck, nearly 1 in 4 people were dissatisfied with their salary after being fired, but men – who saw a smaller pay cut – were less likely to share that sentiment. However, there seemed to be one caveat to the salary decrease: Of respondents who found a job in a new industry after being fired, 57% received a higher-ranking position, likely leading to an increase in pay as well.

Aside from the likelihood of landing a higher-ranking position, switching industries after being fired may increase the chances of getting a job. Specific sectors are experiencing quite a boom, and people seem to be taking advantage of position opportunities. Over half of people got a job in a new industry after being fired, with women more likely than men to do so. 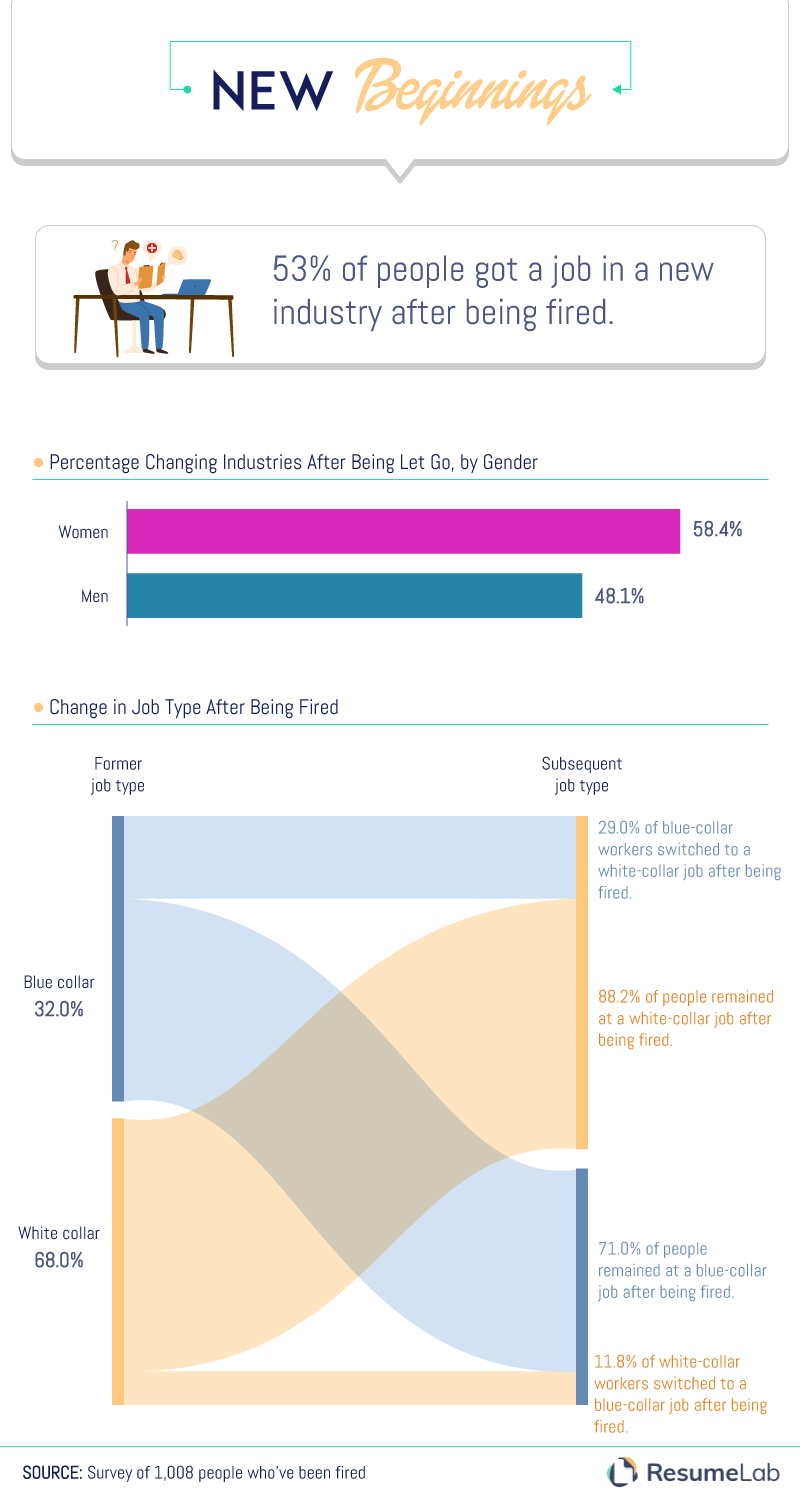 Even with a switch in industry, however, the majority of people stayed in their respective white- and blue-collar sectors. While 88% of white-collar workers got another white-collar job, 71% of blue-collar workers also remained in the blue-collar sector after being fired. However, people who found a job in a new industry after being fired were more likely to be satisfied with their salary than those who remained in the same industry. 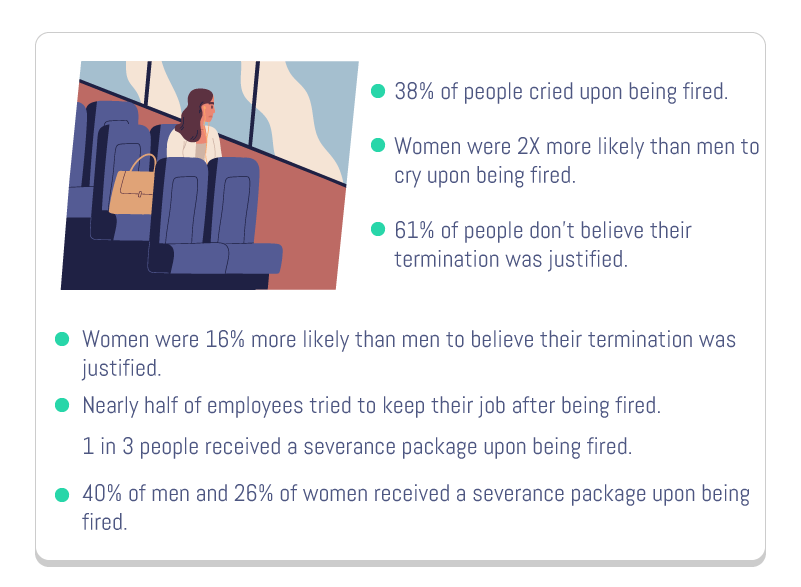 Although being fired isn’t detrimental to people’s careers in the long run, and the chances of landing a higher-ranking position in a new industry are pretty high, getting fired is never a happy occurrence. Nearly 70 percent of men and 66.1 percent of women reported feeling disappointed after getting fired. And while over half of men said getting fired also evoked anger, stress, and frustration, women were significantly more likely to feel 93 percent of negative emotions after being fired.

Getting fired even forced people to make some significant changes. Over half of employees had to adjust their cost of living expenses, while 31 percent had to change their long-term financial commitments and 13 percent had to move to a new city or country. However, despite the changes and negative emotions, employees were still able to find positives in being fired – while 21 percent of employees felt relieved, 17.4 percent of men felt motivated, and 13.2 percent of women felt hopeful.

Stay Up to Date 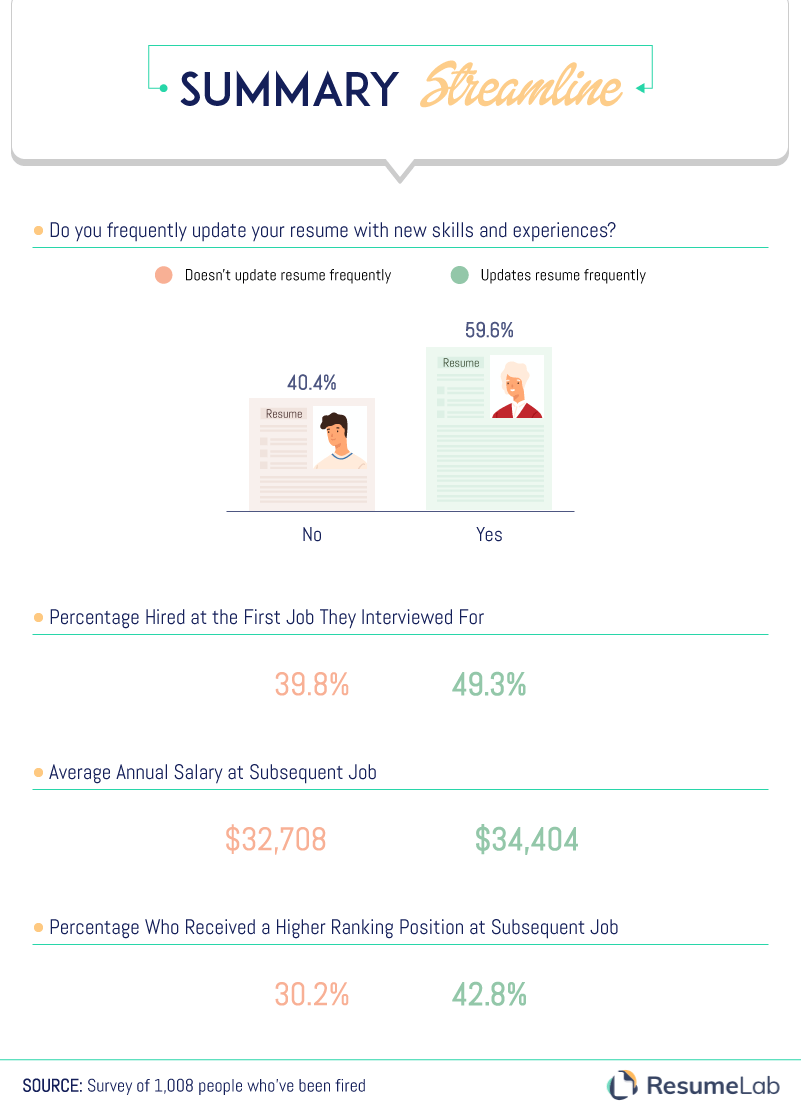 When it comes to landing a higher-ranking job, or a dream job in general, your resume can determine whether or not you are picked for the position. Luckily, most people update their resume with new skills and experiences after being fired – nearly 60 percent do so, increasing their chances of being hired and getting them more money in each paycheck. Compared to 39.8 percent of people who didn’t update their resume, 49.3 percent who did were hired at the first job they interviewed for. Those making changes also earned nearly $2,000 more per year on average at their subsequent job, were significantly more likely to receive a higher-ranking position, and more likely to find a job in a new industry.

Get Your Resume Ready

In today’s job market, getting fired isn’t the end of the road. Whether it’s due to a business’s finances or employee performance, getting terminated can help people find a job in a new industry and even a higher-ranking position with a higher salary. But updating your resume also has a significant impact on finding a job quickly and getting a pay raise.

Knowing what to add to your resume and what to omit can make or break your next interview. At ResumeLab, we’re here to help you take your resume to the next level so that your application will stand out. With more than 100 resume examples and expert advice, we can help you speed up the process and take you from fired to hired. To learn more, visit us online today.

For this analysis, we compiled results from 1,008 people via Amazon Mechanical Turk. Of the 1,008 people polled, 499 were male, 507 were female, and two identified as neither male nor female. Respondents ranged in age from 18 to 78 with an average of 37 and a standard deviation of 11. There were two qualifications to complete the survey: 1) Respondents were required to be currently employed; and 2) respondents must have been fired during their professional career. An attention-check question was used to identify and disqualify respondents who didn’t take the survey seriously. Outliers were removed where appropriate, specifically where annual salary and time spent job searching were questioned. The survey had a margin of error of 3% with a 95% confidence interval. The main limitation of this study is that the data solely rely on self-reporting. Potential issues with self-reported data may include but aren’t limited to the following: attribution, exaggeration, telescoping, and recency bias.