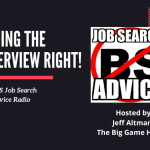 EP 912 Jeff Altman, The Big Game Hunter discusses the way to end a job interview and leave a great impression.

Let's talk about ending the interview. You've been sitting with them for about 45 minutes to an hour, or you've finished a phone call but, more often than not, this scenario is going to come up in the in-person interview.

Here's how it works. They had decisions to make and will decide between you and several other people. How will they choose? Skills, obviously, come into consideration. There are a variety of different attributes they are looking for and personality they are evaluating you for.

Often, there is a very fine line between people. One of the things that starts to happen is managers don't want to make offers that they are not sure are going to be accepted. So, one of the tiebreakers they use in their own mind (after all, it's not like are sitting there going through the checklist, but sometimes it is on the checklist), is whether they think this person will accept our offer if we make a fair offer? Are they interested in the job? Do they want to come to work for us

A manager doesn't want to go through interviewing people multiple times for a job; they just want to be in a situation that if they extended an offer is going to be accepted and they will be done with the job.

Thus, your goal at the end of an interview is to demonstrate interest. So, with the last person you meet, you have to make it clear to them that you are interested in the role. It could be saying something as simple as, "I just want you to know how interested in this role I am. I just it will be a great opportunity for me and I would love to work for you." Or end it by saying the same thing plus, "I would love to work for your organization."

These are words that demonstrate sincere interest. You can't say this like it is canned speech. This is one of these times were acting needs to be part of your delivery.

A lot depends upon the role. If you're an executive, there is a different language that you might use.

"I think this offers a great challenge. I have a few ideas of things that like to do but that's for another day."

"My mind is racing." Like I said, there's a different language. You can't make it sound like a canned speech. Again, this is one of these times were acting is a part of what you are going to be doing in your delivery.

Leave them knowing that you are interested. You can go so far as to ask, "what standing between you and extended an offer? Is there any additional information you need for me?"

You can do this on your way out the door so it doesn't appear to be part of any formal interview. Just let them know that you are interested, asked them for the job so that you ended in a way that lets them know of your interest.