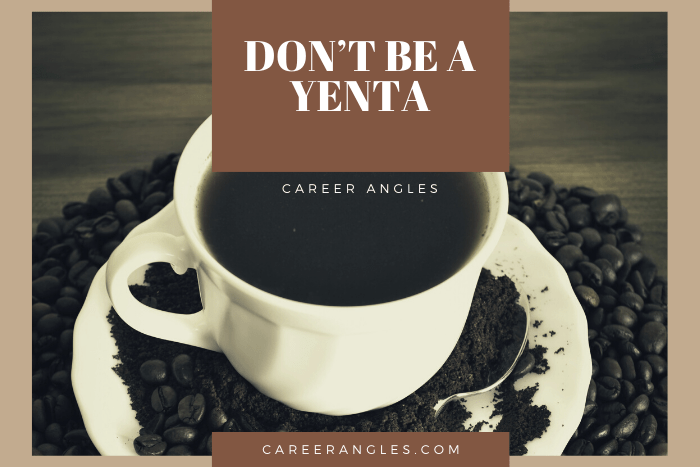 Don’t Be a Yenta

In Yiddish, a yenta is a woman who gossips. In more modern times, I think we recognize that being a gossip is not just something unique to women. Men gossip, too.

There is a lovely story about a man who had this problem of talking about other people way too much. That’s because he was in business and would hear stories from his customers about other people, but had the bad habit of sharing what he heard all the time.

One day, he heard something strange but true about another businessman in town and, as was his habit, he started to share what he heard with others. The story started to go around town until no one would deal with the other businessman. That man went to see the rabbi and cried because he was ruined. No one would talk to him or deal with them anymore.

The rabbi started to reach out amongst the people in his community and, of course, to the man who is the subject of our story. He admitted that he had shared what he had heard but had not considered it would be a problem. After all, the story was true!

When the man heard about the effect upon the person he had gossiped about, he felt genuine remorse. He had not considered that sharing what he heard might hurt the other man.

The rabbi explained that whether it was true or not was irrelevant. You kill a man’s reputation when you talk about him. It is a form of murder.

“What can I do to make it undone,” he asked.

The rabbi asked, “Do you own a feather pillow?”

Thinking that the rabbi would want him to sell them, he told him, “I have several. Do you want me to sell them?”

The man returned the next morning with a pillow. The rabbi open the window and handed him a knife. “Cut it open,” he commanded.

“But rabbi, you will make a mess everywhere!”

The rabbi now ordered him. “Pick up all the feathers. Every one! Stuff them back in your pillow.”

“But, rabbi, that’s impossible! I might find most of them but the ones that flew out the window are gone forever!”

“Yes,” said the rabbi. Once a story, a rumor leaves your mouth, you have no idea where it winds up. It flies everywhere and you can never get back.” You’re the man to sincerely apologize to the businessman about whom he’d spread the rumor as well as to the people he had told the stories to (making them accomplices) and to sincerely study the laws and come back to him after a year.

At the end of the year, he changed his ways and overcame his problem.

I’m sharing the story with you because of the habit I have and I suspect many of you have about being a yenta at work. We talked about others much too often without being aware that our discussions have consequences for them and for us.

I’m not going to ask you to study for a year. I am going to suggest you become aware and stop this insidious behavior.

Jeff Altman, The Big Game Hunter is a career and leadership coach who worked as a recruiter for more than 40 years. He is the host of “No BS Job Search Advice Radio,” the #1 podcast in iTunes for job search with more than 1900 episodes, and is a