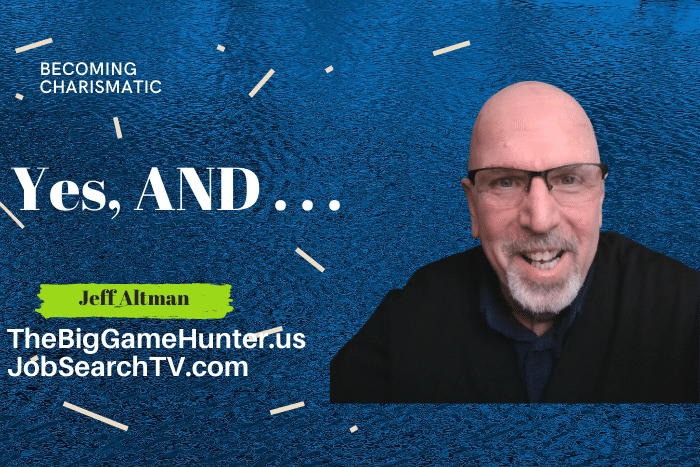 People who were charismatic always do better than those who aren’t. In this video, I will explain a way to make yourself more likable and more charismatic using this technique.

Charismatic people always do better professionally than those who are not charismatic. Often the difference between being seen as charismatic, and not, is likability.

How do you do things differently so that you don't turn people off? I learned a trick a while ago. It's the concept of Yes, And. And the idea very simply, is, whenever you add on to something that someone else says, you start by saying "yes," because it's the idea of saying something positive to start the conversation that makes your mind start to again, speak in positive terms, as opposed to critical terms. Yes. And so you're agreeing with the other person, and then going from there.

And if you don't want to agree, you have two choices, keep your mouth shut, or asking a question. And the question might be, "I'm curious. Have you considered such and such," rather than telling someone that they're wrong, and crushing them at that moment.Because that's how they feel is crushed? Isn't that how you would feel if someone basically said you're wrong?

This is why, instead, "have you considered such and such? Because that's what first came to my mind. And if you have considered it, explain to me why that didn't work," and say it in a way that doesn't seem confrontational.

"Yes, and" is a positive continuation of what someone else says. It piles on positivity. It does not negate what was previously said; it enhances it. And if they're wrong, instead of crushing them by saying, "I don't think so," it's "Have you considered such and such?" These are things I know I need to work on. And I suspect many of you do, right.

Hope you found this helpful. I'm Jeff Altman. If you keep doing things like what I'm doing in this series, you will be seen in a better light, you'll attract more people to you instead of turning them off. And that will enhance you in your career, your job search in your management and in your leadership.

Have a terrific day and most importantly, be great

Jeff Altman, The Big Game Hunter is a career and leadership coach who worked as a recruiter for more than 40 years. He is the host of “No BS Job Search Advice Radio,” the #1 podcast in iTunes for job search with more than 2300 episodes. He also hosts Job Search TV on YouTube, Amazon and Roku, as well as on BingeNetworks.tv for Apple TV and 90+ smart sets.