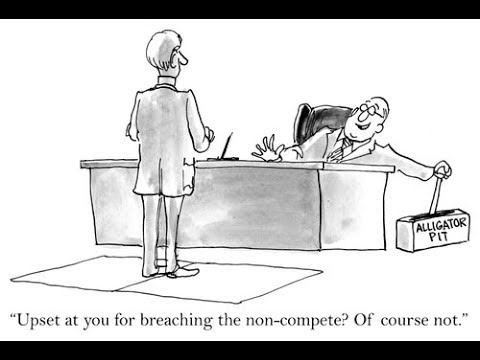 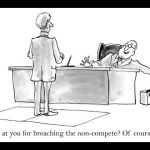 I'm working with two people now who are operating under non compete agreements. Each of them has signed them voluntarily. Each of them is in a quandary. Let me walk through situations.
The first one has signed a non-compete with a US firm based in the northwest. He has received and accepted an offer with a competitor in Europe and the his employer has decided to enforce the non- compete-- one year. One year, in theory, he's not going to be able to work. They're going to pay him at half pay during that period of time. Not a lot of money for him to live on. Although the firm in Europe is willing to wait for him (which is astonishing, isn't it) one year, they're willing to wait for him because they see his value. Still, he's left with a mystery and the mystery is, does he have to sue? Is there a way that he can negotiate his way out of this and reduce the one year to, let's say, six months. After all, his new role has nothing to do with his old role. He's offered to voluntarily remove himself from professional situations that involve any proprietary knowledge that he has. Amazing, isn't it? It leaves him with a mystery.
The second individual is in the northeast. He, too, has signed the one year non-compete. And he's in a situation where he works for a small private firm, and is kind of negotiating his way through his choices at this point or I should say, what he's interested in, he's at the beginning of the search. In effect, what he's eliminated from his choices with this agreement, is that he can't go to work for a "similarly industried firm" and that removes a sizable number of his choices, as well.
I raise this as a subject because, the second individual, the one who I just finished outlining, the second individual believes that because he lives in a state that isn't really supportive of non-competes, he'll be able to walk away and not worry about his non-compete.
The issue isn't whether someone can or can't. It is the issue of the mystery until you face it, and how that will impact you and how that will impact the next employer and your relationship with them. I'm telling you, you have no leverage greater than before you sign that non-compete because the firm wants you.
Tell them very simply, you're not going to sign a non-compete. And if they don't like it, that's fine. You know, there are other firms that are prepared to hire you and will. "As matter of fact, I have two other offers right now but if you really want me, get rid of it." It's truly that simple.
I'm telling you, most of the firms will damage you in your career with that non-compete. I'm not talking about a situation where you're selling your business and you are agreeing that for a period of one year, for example, you will not compete with the buyer in a competing business. I'm not addressing that situation, I'm addressing you, as an employee, not putting yourself in a position where there's something hanging out in the wind that can damage you. It can cause you to lose opportunities . . . there's no risk with the first person but, I';; tell you, he's been agonizing for weeks now with that non-compete.
So, avoid the negotiate before you join. Negotiate removal. Negotiate a reduction in time and increase in awards to you during the time of your non-compete. Negotiate everything at that point because, like I said, you have no greater leverage than that.