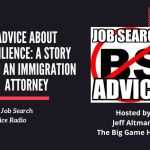 FROM THE ARCHIVES (2011) My friend, Richard, shared a story with me that I thought was worth sharing because of how it can be applied to job hunting.

NOTE: I no longer do recruiting. I am a career coach who helps with job hunting, hiring, managing, and leading staff, and being effective in the workplace. Any job mentioned during this podcast was filled years ago.

Advice About Resilience: A Story from an Immigration Attorney | No BS Job Search Advice Radio

You may also enjoy, “Cowards and The Valiant,” too.

Photo by Shaun F from Pexels