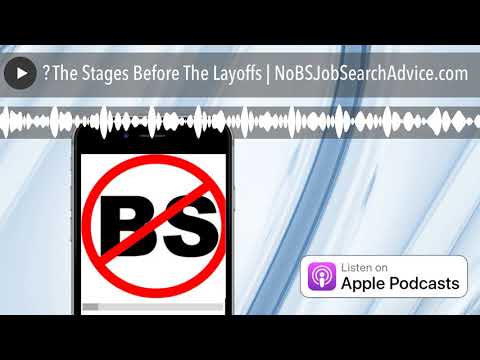 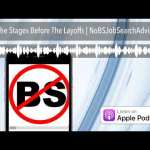 EP 1559 I discuss a few signals to look for BEFORE the layoffs start.

Right now, we are in relatively good economic times that doesn't mean a layoff isn't going to becoming. That's because the reality is, as you know I both know, intellectually, there are business cycles and there are good times and in their bad times. When the bad times occur, that's when the layoffs show up. When there are good times, no one ever thinks they are ever going to be laid off. But, I want to get you prepared. I want you to recognize the cycles and how the layoffs come in.

The 1st stage of the layoff cycle is that your office may start to grumble with rumors and people start to talk and gossip about things that they've heard and what is going to happen next. The fact of the matter is the staff doesn't know anything and is trying to make sense out of what seems like a scary situation. No one really knows anything and never was starts to believe something. As a result, everyone talks and a lot of people start to interpret different things and speculate about things they hear from one another that have no basis in reality.

Often, what starts to happen is absenteeism starts to increase as people start to become "ill" (if you get my meaning), or try to get a head start on job hunting. Managers start to approach, select employees. That's the 1st step.

What is often helpful is if they give you pre-notice. Your manager comes you and says, "You know, Susan, you are on the list." What happens is that you get a head start for heading for the doors. You know you could be fired with the next layoffs to start looking now.

There's a guy I knew sometime back who was working for bank and was told by his boss that he was going to be the next where the job cuts. According to bank policy, you knew what his severance was going to be so that you can use this time before the actual layoff to get his resume ready and get out on some interviews. It worked beautifully for him.

There are a few other contingencies... Actually one big one.

"If you stay until such and such date, we have a great deal for you!" In this situation, you can have an acquiring firm that is going to consolidate. There will be layoffs. As a result of that. In acquisition, sometimes in your management says and what happens with the new management comes in can be completely different.

There is an instance where the old Bear Stearns was being acquired by J.P. Morgan Chase. There was a support guy who is doing executive support for Bear Stearns whose approach to stay on with the firm during the acquisition until it closed. Then, he was going to get this huge severance. There is only one problem – – the acquiring firm wasn't told anything about this. They know anything about the promise that if he stayed on until the end, they would double is pay his severance.

I understand what he stayed until the end , but the acquirer didn't know anything about it. The result was you got the standard back layoff package from the acquiring firm instead of $180,000. Just be aware that this kind of stuff happens and when they start talking with you about the sweet deal, particularly in acquisition, who, on the other side of the deal is going to know about this and sign off on it before you get hoodwinked.

Jeff Altman, The Big Game Hunter is a coach who worked as a recruiter for what seems like one hundred years. His work involves career coaching, all as well as executive job search coaching and life coaching. He is the host of “No BS Job Search Advice Radio,” the #1 podcast in iTunes for job search with more than 1500 episodes and his newest show, “No BS Coaching Advice” and is a member of The Forbes Coaches Council.

Are you interested in 1:1 coaching, interview coaching, advice about networking more effectively, how to negotiate your offer or leadership coaching? Message me at my website, www.TheBigGameHunter.us

Join And Attend My Classes On Skillshare https://thebiggamehunter.us/Skillshare